Tough to be a Tyee 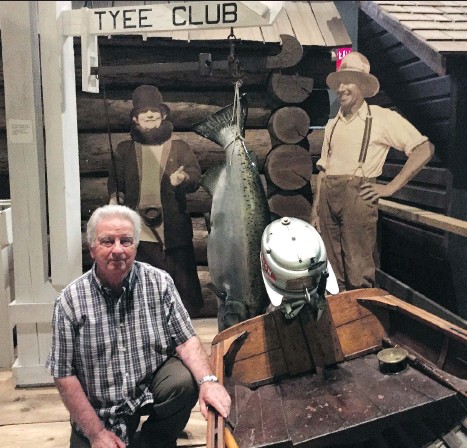 Read the full article on the Vancouver Sun

Captain Gary and his fiancé, Linda are headed up north to Haida Gwaii to hunt the elusive Tyee Chinook salmon. Gary became a member of this exclusive club in 2002 on his birthday by landing a 42 pounder, fishing out of Queen Charlotte Lodge with his brother, son, and father.  His son, Michael then only 10 years old, also joined the Tyee Club with a 31 ½ pounder, almost as long as he was tall.  So now it’s Linda’s turn!  Results of this trip will be posted.

It takes just five minutes for a 14-foot fibreglass boat with wood trim, propelled by a six-horsepower outboard motor, to navigate around Tyee Spit at the mouth of the Campbell River and into a popular fishing spot known as the Tyee Pool.

When you get there, you might think you’ve been transported back to 1924, the year the exclusive Tyee Club of B.C. was formed.

Seeing one rowboat bobbing in the ocean is something of an oddity; seeing 50 in one spot is eyepoppingly unusual.

“Just imagine what’s going through the minds of people on the cruise ships when they see all these rowboats out here,” remarks Roger Gage, the club’s vice-president, who joined at age 12 with a 39.5-pound catch.

“It must be like the Titanic … an accident out here.”

Club rules have tightened over the years: Currently, you must catch a minimum 30-pound chinook salmon using a maximum 20-pound test line, six- to ninefoot rod, hand-operated reel, and single barbless hook with artificial lure. Bait, depth sounders and other electronics are not permitted, and outboard motors must be tilted up and replaced with human power in the Tyee Pool.

“Rowboat fishing like this … most of the time it’s more about the experience,” Gage explains. “Some people have been out here 10 to 12 years and are still looking for their first 30-pound fish.”

Gone is the golden age during which Hollywood movie stars such as John Wayne, Susan Hayward, Vincent Price, Glenn Ford, Bing Crosby, and Bob Hope would make their way to B.C.’s salmonrich waters.

Joe Watson, a fishing guide for 48 years, says he guided Wayne in 1975-76. Wayne’s vessel was the Wild Goose, a converted U.S. navy mine sweeper.

“Not much of an actor,” Watson says. “Same guy in person as he was in the movies. But a wonderful, delightful man. He loved fishing.”

Wayne gave Watson a cigarette lighter pre-engraved on the back with the words: “This lighter was stolen from John Wayne.”

Canadian luminaries included John Diefenbaker, who, people may forget, was also a talented criminal lawyer in Saskatchewan. Watson quotes the former Conservative prime minister as saying: “Joe, do you know how much money it cost to have someone murdered on the Prairies in the 1930s? Five hundred dollars.” That’s also what he charged for his defence fee.

Neither Wayne nor Diefenbaker became members of the Tyee Club.

The walls of Painter’s Lodge are plastered with historic fishing photos, and there is a special exhibit about the Tyee Club in the Museum at Campbell River, complete with a life-size photo of Rufus Gibbs, club president from 1953 to 1957 and owner of a popular Vancouver tackle shop.

Norm Lee, historian for the Tyee Club, notes that American author Zane Grey is an honorary member of the Tyee Club. “He was a man of ‘record’ fish only. He would not register unless he had the biggest fish.”

Angling author and conservationist Roderick Haig-Brown talked about the exceptional challenges of catching a fish in the Tyee Pool in his 1939 book, The Western Angler.

He suggested that one of the challenges is that the fish holding in the pool have stopped feeding in preparation for their final spawning run, and are reacting to a lure out of aggression, not hunger.

Today, most men and women fishing the Tyee Pool are from B.C., more specifically Vancouver Island, but some continue to visit from the U.S. and as far as Europe. Only a small number in the pool are hired guides.

“I don’t like to powerboat fish, it’s too easy,” remarks Mike Kauertz, a semi-retired lawyer from Duesseldorf, Germany, who has flown to Campbell River almost annually since 2003. “It’s a big challenge … but it’s really not about fishing. It’s just to be out there in nature — the whales, the sunrise. It’s a quiet thing to do. Not stressful.”

Unlike most anglers in the Tyee Pool, Kauertz goes out alone, handling both the fishing and rowing duties.

First and last light of the day are the most popular times for fishing. The Tyee Pool season lasts from July 15 to Sept. 15, with fishing peaking in later August through Labour Day.

“They’re holding in a pool,” Gage says of the chinook. “Their incredible journey is getting near an end and they ’re schooling up and waiting for the right time to go upriver.”

Transport Canada forbids motorized boats in the Tyee Pool during the season. Still, occasionally, an ignorant boater or even float plane pilot violates the pool’s sanctity. A defiant Aboriginal once towed a gillnet through the rowboats.

Chief Chris Roberts of the Wei Wai Kum First Nation in Campbell River said there is a historic village site adjacent to the Tyee Pool, and his people feel displaced from this traditional fishing area. Members of the First Nation harbour “a bitter feeling toward the whole history of the Tyee Club, as we have never been properly acknowledged as the rightful and original owners of this valuable resourceharvesting spot,” he said.

Of course, club members value their own traditions, and argue they give back to the chinook, having worked for decades to improve river spawning habitat and remove tonnes of debris such as tires from the estuary and spit.

Everyone has their own strategy for catching a chinook. “Put in your time,” Watson allows, adding: “The tides have a big influence on what’s going on out there. The fish will hold in the tide. If you know where they’re holding, put your lure down in front of them, and if they’re so inclined, they’ll bite it. It can be fairly precise.

“They’re always down there somewhere.”

The two basic lures are a spoon or a plug — and a general sense of nostalgia infects the club. Members can be brought to their knees at the thought of acquiring a collectible Lucky Louie plug.

There is no wind this evening, and the sun is a big red ball hanging low in the sky due to forest fires burning around the province. Quadra Island, on the east side of Discovery Passage, hides behind a grey veil. We fish for about an hour, exchanging pleasantries with other anglers as the rowboats go up and down the spit parallel to the shoreline, and laughing at some of the trash talk. “Get out of here,” one man says to another. “You’re full of crap.”

Fishing lines generally do not get tangled, and only once can Gage recall a rowboat flipping. “They got a fish on, they went to net it, and everyone looked over the boat and it flipped. The fish — 48 pounds — stayed in the net, they found the tackle, and a bunch of boats went out to rescue them.”

Suddenly, I feel a tug on my line — and set the hook. Gage shouts “Fish on!” and boaters nearby politely reel in their lines.

I let out plenty of line, and a big fish breaches hundreds of feet in the distance. “Is that really mine?”

I am no expert, but know generally when to allow a fish to run and when to reel it in. “That a boy,” Gage says. “Keep your rod tip pointed at the fish.”

It takes me just under six minutes to bring the exhausted chinook alongside the rowboat. Gage deftly hauls it aboard in a net, saltwater spraying all over us. “It’s karma,” he says. “You’ve got a positive vibe.”

Kauertz drifts by and says, “See, it’s not rocket science.” Thanks, I think.

Gage bonks the fish on the head, thensizesuptheprize—abigfish by any measure, but almost certainly shy of the 30-pound Tyee Club standard. “A pretender,” he concludes.

As the light continues to wane, the armada of rowboats becomes a riot of twinkling lights — white at the stern, green and red at the bow.

Only five people within the pool of 50 boats, many with two anglers apiece, catch a chinook this evening — only one of them Tyee status. As part of federal regulations aimed at rebuilding chinook stocks and helping resident killer whales, anglers are restricted to a daily limit of one legal-sized chinook and a possession limit of two, within the Campbell River area.

The annual limit of 15 chinook in the same area may seem excessive, but Gage insists few people reach that level.

“We’re not putting a dent in the population,” he argues.

Chinook in these waters are generally not as big as the old days, making for a greater challenge to join the club. Last year, 44 Tyees were registered with the club, each designated a Tyeeman, regardless of gender.

Wild chinook spawn in the short Campbell River, while the greater number of hatchery chinook continue upstream to the federal Quinsam River hatchery, opened in 1974. About 9,500 chinook spawned in the combined CampbellQuinsam system last year, up from a recent low of 2,600 in 2014, but well below 14,500 in 2001.

Still, I am thrilled, and arrive back at the clubhouse on the spit to a jubilant welcome. “The story ’s all going to be about him now,” teases Sharon Fisher, the club’s recent past president.

Weighmaster Bob Goodwin announces the weight at 24 pounds — which compares with a club record 71-pounder caught by Walter Shutts of Corvallis, Ore., in 1968 — and says there’s no point in trying to slip him a sawbuck to tip the scales.

Goodwin has seen grown men cry when their chinook catch came in a fraction less than the required 30 pounds. Partial pounds registered on the official scale are always rounded down — not up.

And so it should be, for where are the bragging rights in a club that is too easy to join? As The Duke once said: “A man deserves a second chance, but keep an eye on him.”

Read the full article on the Vancouver Sun